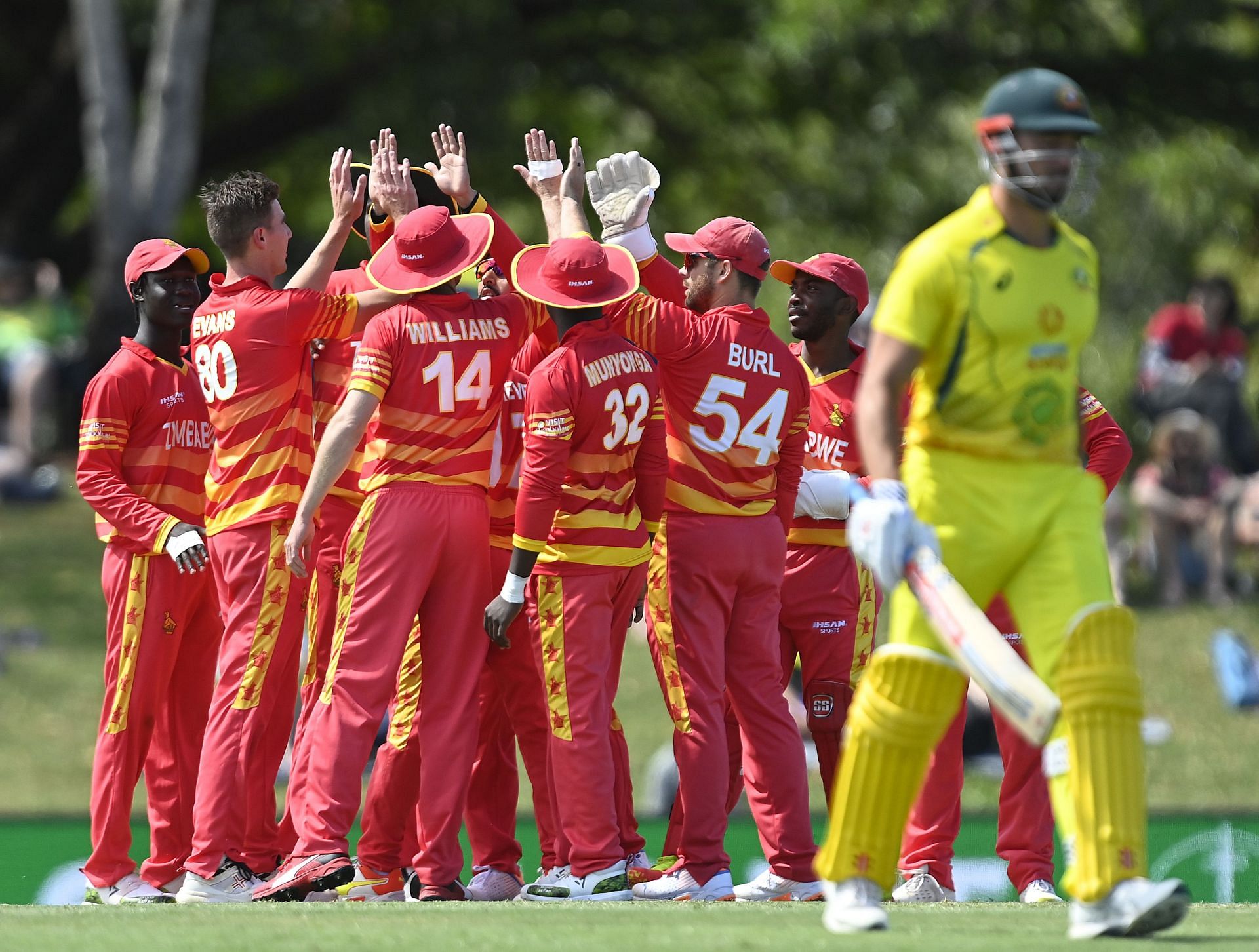 Zimbabwe created history on Saturday (September 3), registering their first win over Australia on Australian soil. The South African nation clinched a three-wicket victory over the Aussies in the third ODI of the three-match series in Townsville.

Bowling first after winning the toss, Zimbabwe bundled out the hosts for a paltry 147 in 31 overs. Part-time leg-spinner Ryal Burl was the surprise hero for the visitors, claiming 5 for 10 in three overs. Brad Evans also chipped in, picking up 2 for 35 in six overs.

Zimbabwe’s batters came up with a nervous response, but hung on to complete a memorable win in 39 overs. The winning moment came when Evans drove Mitchell Starc through the covers for a single and roared in delight.

Josh Hazlewood gave Zimbabwe a scare, reducing them to 44 for 3 by the 11th over after the openers featured in a solid 38-run stand. The Aussie pacer broke the opening partnership by having Takudzwanashe Kaitano (19) caught at slip.

Wesley Madhevere (2) and Sean Williams (0) fell off consecutive deliveries. Madhevere slashed a short ball to point to give Hazlewood his 100th ODI scalp. Williams then got a brute of a short ball that he could only fend to the keeper.

Zimbabwe were in further trouble when their key batter, Sikandar Raza (8) top-edged a pull off Marcus Stoinis to long leg. Tadiwanashe Marumani batted well for his 35 before a wild swing off Cameron Green led to his dismissal. At 77 for 5, it was anybody’s game.

Zimbabwe skipper Regis Chakabva, however, led from the front with a defiant 37* off 72 balls. He held the innings together and featured in a sixth-wicket stand of 38 with Tony Munyonga (17). There were some flutters as Burl (11) fell five runs short of the target. He became Starc’s 200th ODI victim. However, Chakabva and Evans held their nerves and ensured the visitors completed a historic win.

Australia were bundled out for 141 in 31 overs after being asked to bat in the third one-dayer. The Aussie batting was a one-man show as opener David Warner compiled 94 in 96 balls. The remaining batters combined to score a total of 47 runs. Glenn Maxwell (19 off 22) was the only other Australian batter to reach double figures.

In a pathetic batting display, the hosts lost half their side for 72 by the end of the 18th over. Australian skipper Aaron Finch (5) was the first to go, caught at slip off Richard Ngarava. Steven Smith (1) was trapped lbw as he left a ball from Victor Nyauchi that nipped in from outside off-stump.

Alex Carey (4) and Stoinis (3) were both caught behind off Evans’ bowling. Green (3) failed to keep his drive down and was caught at cover off Williams’ bowling. Warner and Maxwell added 57 for the sixth wicket to lift Australia’s hopes of a fightback. The stand was broken when the Big Show was caught and bowled off Burl, getting a big leading edge while attempting a swing.

Ashton Agar (0) fell in the same over to the Zimbabwe leggie, clipping a full toss to midwicket. Warner’s vigil too ended when he slog-swept Burl to deep midwicket. Starc (2) and Hazlewood (0) also did not offer much resistance. Both fell to Burl, who completed an amazing five-fer in three overs.

Even as Australia struggled at one end, Warner seemed to be batting on a different surface. He hammered Ngarava for consecutive fours in the seventh over and began the 13th over by clubbing Evans for a six and a four.

In all, Warner struck 14 fours and two sixes. But the lack of support meant Australia’s innings went nowhere.