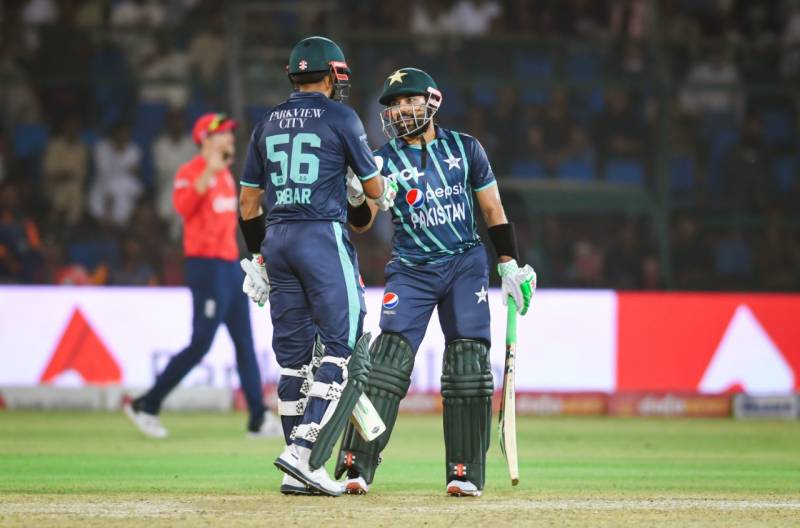 Pakistan’s opening pair of Babar Azam and Mohammad Rizwan proved lethal as the duo powered the men in green to a perfect 10-wicket victory over England in the second T20I as they amassed 200 runs in the final over.

Set to chase a mammoth 200 in the second T20I, the Pakistan opening duo decimated the English bowling attack as they stitched an astonishing run chase for the men in green.

The duo stood firm and charged England bowlers with clean striking and brilliant running between the wickets and remained unbeaten in a perfect run chase to power their side to a 10-wicket victory.

Pakistan captain Babar, who had a forgetful Asia Cup 2022, ended his struggling phase as he smashed an astonishing century to script a perfect victory for his side. He scored 110 not out off just 66 deliveries, laced with 11 boundaries and five sixes.

Rizwan, on the other hand, scored an unbeaten 88 off 51 deliveries including five boundaries and four sixes.

England bowlers had a forgetful outing in the second T20I of the seven-match series as none of the touring bowlers could open their account.

Following this magnificent victory, Pakistan leveled the series 1-1 with five games to spare. The two sides will meet again on Friday at the same venue.

Batting first, England batters displayed combined effort and took on Pakistan bowlers to finish at a mammoth 199/5 in the allotted 20 overs, at the back of a quickfire half-century from their skipper Moeen.

England openers Alex Hales and Phil Salt gave the touring side a flying start as the pair amassed 42 runs for the first wicket in just five overs.

Right-arm pacer Shahnawaz Dahani then made back-to-back strikes in the sixth over to reduce England to 48/2 after the powerplay. The right-arm pacer removed Hales and Dawid Malan in his consecutive strikes. Hales scored 26 off 21 deliveries, while Malan bagged a golden duck.

Following the slump, Salt then joined hands with Ben Duckett and made sure to keep the run rate intact as the pair added 53 runs for the third wicket at a rapid pace.

The stand was majorly dominated by Duckett, who was dominating the Pakistan bowlers with blistering strikes while Salt was struggling to emulate his heroics, and, as a result, fell victim to Haris Rauf in the 12th over. He scored 30 off 27 deliveries, laced with one boundary and a six.

Duckett’s stay at the crease also remained brief as he perished in the next over after scoring a quickfire 43 off 22 deliveries with the help of seven boundaries.

England skipper Moeen and all-rounder Harry Brook then stood up for their side and put on a match-defining 59-run partnership for the fifth wicket, that bolstered England to a massive total.

Brook, however, fell in the 17th over as Haris castled him to bring an end to his astonishing cameo that saw him scoring a magnificent 31 off just 19 balls including a boundary and three sixes.

Moeen, on the other hand, remained unbeaten with a terrific half-century and scored a quick 55 off a mere 23 deliveries, laced with four boundaries and as many sixes.

For Pakistan, Haris and Dahani bagged two wickets each, while Nawaz castled a batter.