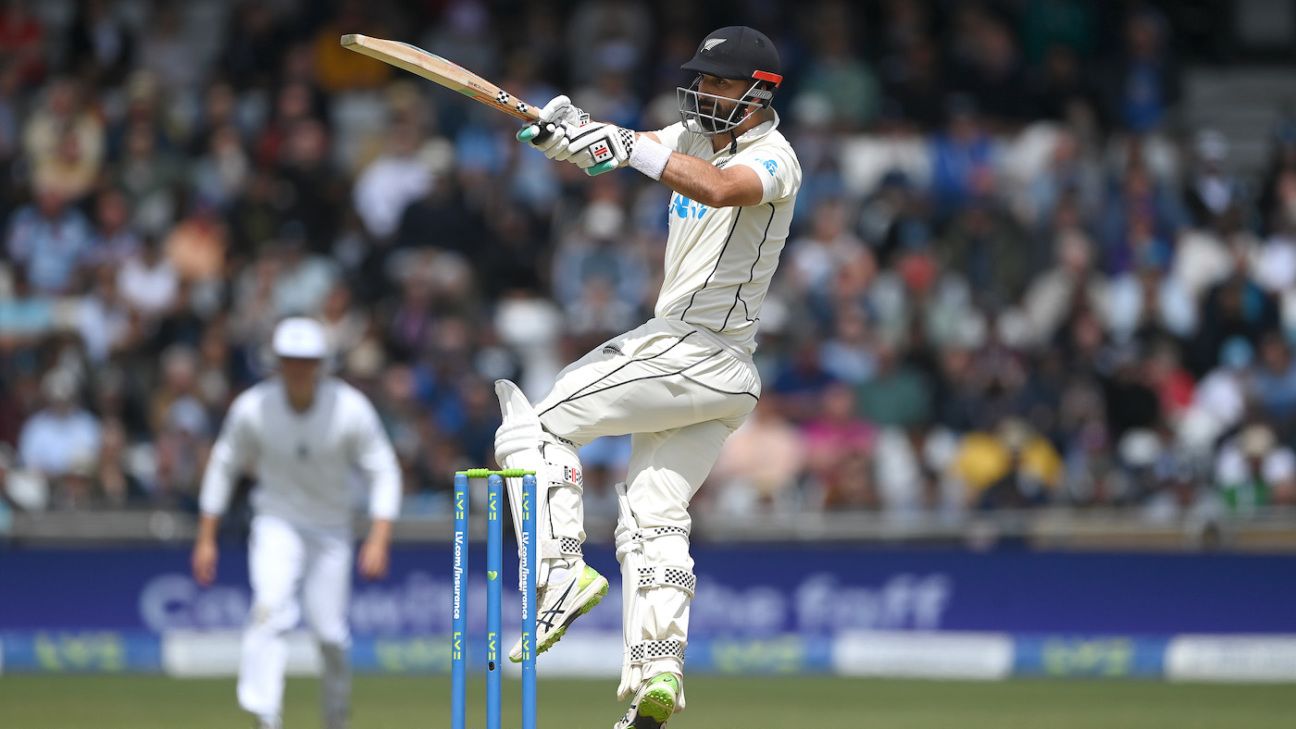 By lunch, the pair had added 94 for New Zealand’s sixth wicket – six runs shy of their fourth century stand of the series – including 86 in a wicketless morning session, to extend their team’s overall lead to 223. It was another typically nuggetty display from two men whose frill-free accumulation has been New Zealand’s most consistent antidote to England’s hard-pressing new approach, and despite a disciplined session of toil from England’s attack, their only real moment of alarm came when Mitchell, on 17, successfully reviewed an lbw decision against Jack Leach.

England resumed the day with a spring in their step, following their flurry of four wickets after tea on the third evening, and with a new man in their ranks, with Sam Billings drafted in overnight as an officially sanctioned replacement for Ben Foakes, who returned a positive Covid test having missed the whole of day three with a stiff back. It meant that Billings, whose first Test cap came in similarly last-minute circumstances at Hobart in January, will be able to bat as and when England’s run-chase gets underway.

That doesn’t seem quite such an imminent prospect as it might have done had either of New Zealand’s incumbents been dislodged in the morning session. England opened the day with a tight spell from Stuart Broad and Matt Potts, their outstanding seamer of the match so far, who once again beat the bat on his consistent full length but couldn’t snag the edge as Mitchell and Blundell set themselves once more for the long haul.

Another replacement ball – the 12th of the match – came and went without fuss, and after half-an-hour of unfussy progress from New Zealand, Leach returned to the attack – in harness with the extra pace of Jamie Overton.

It was the spinner who provided the greater threat, however, and after beating everything with a snorter that turned and bounced past Mitchell’s edge and Billings’ gloves, Leach thought he’d prised the breakthrough after thudding Mitchell’s front pad with one the skidded straight on. On review, however, the ball was shown to be skimming over the top of middle, and as England’s fielders groaned in frustration, umpire Marais Erasmus looked mildly bewildered as he shook his head and overturned his decision.

With such encouragement for spin, Stokes turned to Joe Root’s offbreaks in the second hour of the morning, but Mitchell in particular tucked into his offerings, picking off two reverse-sweeps for four in Root’s first over, then skipping down the track in his next for the first of two more boundaries in a row.

Root did respond by drawing a brace of false strokes from each batter, including a head-high flick past Ollie Pope at short leg, but England’s most realistic hope of a breakthrough came from the second new ball. That was duly taken with two overs to go until lunch, and Broad in particular had one lively appeal for lbw against Blundell, but the ball struck him outside the line.