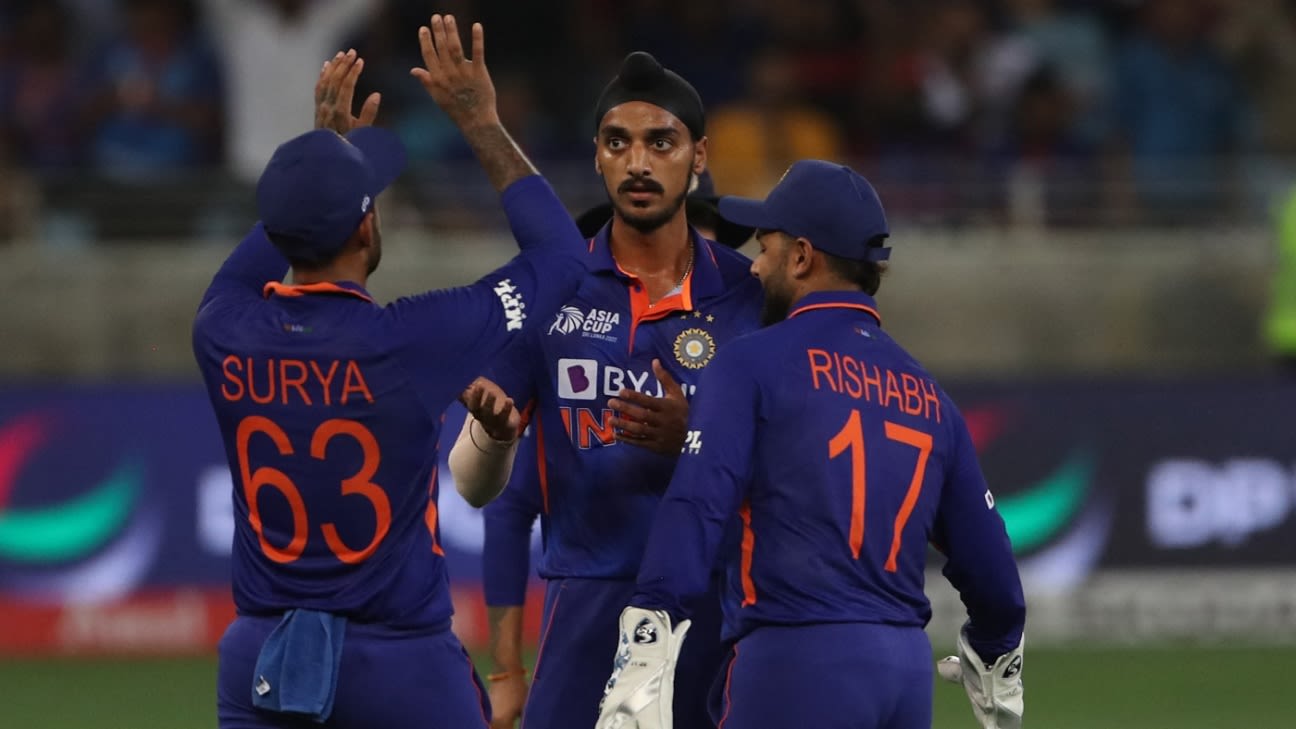 Rahul Dravid is clear that India will look to play their best XI from now on, leading into the men’s T20 World Cup, without worrying about workload management.
“Unless there’s an injury or a niggle, or someone needs to be kept out, we’ve always come here wanting to play our best possible squad or the best possible XI that we can select,” Dravid said a day before India’s Asia Cup Super 4s game against Pakistan. “The next four games as well, depending on who is available, we will be looking to play our best side.
“There’s not going to be any workload management over the next three or four days, unless of course it’s forced upon us – for example, [Ravindra] Jadeja. Other than that, no. We’re looking to play every single game trying to win this tournament and do the best we can. We’ll have time after that to manage the workloads. From now on in leading into the World Cup, we want to be playing out best squad as and when possible.”

While it’s difficult not to look at the bigger picture, the T20 World Cup, India are trying to be firmly in the present, Dravid stressed, and were preparing to have a squad pool that would be match-ready across different conditions.

“We are absolutely focused on trying to play these conditions and do this – you should have players in your 15 that irrespective of the conditions you’ve got to be able to try and play your best XI,” Dravid said. “That’s the effort to build the kind of squad that we have. We may succeed and one or two areas you may not get the perfect selection of skills in your 15, but the effort is always there to have all your bases covered.”

Asked to weigh in on the Rishabh Pant vs Dinesh Karthik toss-up, Dravid explained that the best XI could – and would – change depending on conditions and opposition bowling attacks, and that there was no clear first-choice wicketkeeper-batter just yet.

“On that day, against Pakistan, we felt that Dinesh was the right choice. Like I said earlier, it’s always going to be difficult to leave out anyone. We play Rishabh and leave out DK and a lot of people are going to be upset with that. We can’t rely on that and, honestly, we don’t pay much attention to that.

“We focus on just trying to pick what we think is the best XI. And with the intelligence we have in our group, we’re pretty confident that we take all of those things into consideration and have a bit of a squad culture in our side in the sense that we believe that we have a really good squad of 15. And any 11 of those can play. Sometimes good players will miss out. Players that people feel should play will miss out, but that’s just the way it is.”

India have been trying to change their batting attitude in T20 cricket, looking to bat up-tempo for longer periods than they might have before. Dravid said that while there was no confusion in the minds of the players, the definition of “aggressive” changed according to situations and conditions.

“Yeah, everyone has bought into it. We have talked about playing positive cricket but also being smart as well as being positive,” he said. “Sometimes you have also got to ensure that. I think it’s about ensuring that you sort of get that par-plus score, depending on what the par is on that particular wicket and in those conditions. I think that’s really important.

“At least we don’t want to be the team that falls below par in a particular game. And that par can change, right? On a really flat wicket and small boundaries, par might be 200. On some other wickets, the par might be 150. We have seen some pretty challenging wickets in this tournament and probably it’s not 200-run games thus far. Whatever the conditions that are in front of us, we want to ensure that we are par or par-plus.

“Everyone’s very keen to try and go about that and achieve that and it’s not always that we are going to be able to succeed but certainly we will be looking to be positive and play a kind of cricket that T20 cricket demands today.”