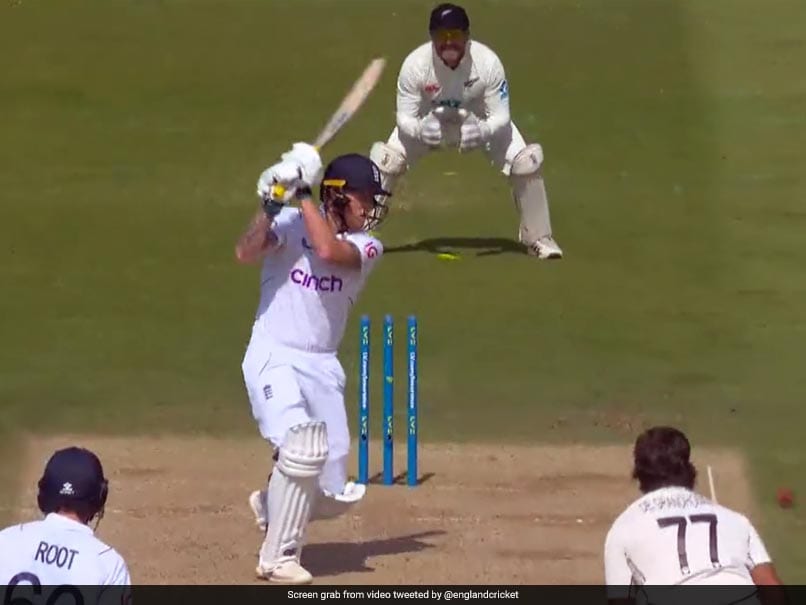 Newly-appointed England skipper Ben Stokes got a massive reprieve on Day 3 of the ongoing first Test against New Zealand at Lord’s. In the 27th over of England’s second innings, Stokes, who was batting on a score of one, was castled by Colin de Grandhomme on a no-ball. On the fourth delivery, de Grandhomme pitched a short-pitched delivery, but Stokes tried to pull it over the off side. However, the southpaw played it onto his stumps. But the replay showed that de Grandhomme had overstepped as no part of his heel was behind the popping crease.

As a result, the umpire decided to recall Stokes back in the middle.

“A huge reprieve. Yet more drama in this Test match,” the England and Wales Cricket Board captioned the video on Twitter.

A huge reprieve. Yet more drama in this Test match…

It was a massive let-off for Stokes as England were already four wickets down at that point.

At Tea, England were 99 for four with Stokes and his deputy Joe Root batting on 15 and 23, respectively.

Earlier, New Zealand had taken a 276-run lead after Daryl Mitchell and Tom Blundell‘s heroics with the bat.

Mitchell scored his second Test century, while Blundell depart after a finely-crafted 96, as the reigning World Test champions managed to put 285 runs on the board in the second innings.

Initially, New Zealand, after opting to bat, were bowled out for a paltry of 132, with debutant Matthew Potts and James Anderson taking four wicket each.

In reply, England could only take a narrow lead of nine runs after New Zealand pacers, led by Tim Southee‘s four-wicket spell, skittled them out on 141.