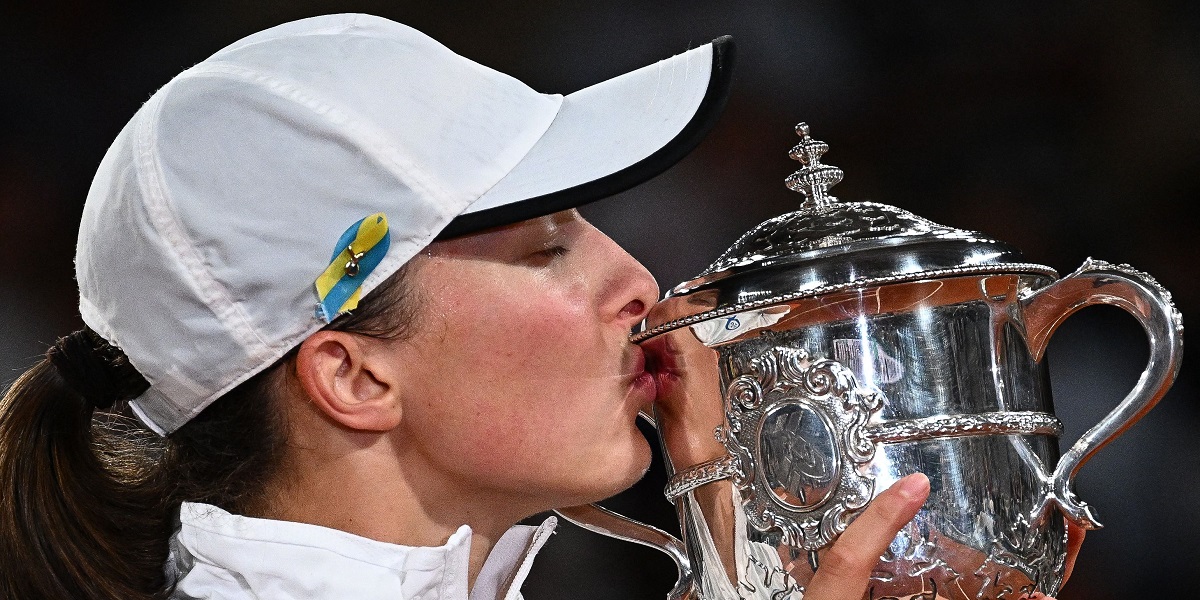 Iga Swiatek admits she has “no expectations” for Wimbledon despite extending her winning streak to 35 matches and claiming her second French Open championship.

The world number one defeated Coco Gauff 6-1, 6-3 in the Roland Garros final on Saturday to win her sixth consecutive tournament this year, including four WTA 1,000 titles and one major.

The Polish player won the Indian Wells-Miami double to demonstrate her hard-court power, having also won in Doha, and has now dominated on clay by winning in Stuttgart, Rome, and Paris.

To prolong her winning streak, she may need to improve upon her four wins and four defeats in a lifetime main-draw match on grass.

“My coach (Tomasz Wiktorowski) believes I can win more matches on grass,” said Swiatek, who has reached the second week at seven consecutive Grand Slam tournaments.

“But honestly, grass is always tricky. I actually like the part that I have no expectations there. It’s something kind of refreshing.”

Swiatek showed glimpses of improvement on the surface by advancing to the fourth round at Wimbledon, while her coach Wiktorowski saw his former pupil Agnieszka Radwanska achieve her sole Grand Slam final at the All England Club in 2012.

Read more: Alexander Zverev is out of the 2022 French Open due to an ankle injury

“Maybe with his experiences that he had with Aga Radwanska, it was her favorite surface, so maybe he’s going to give me some tips that are actually going to be really helpful, and I’m going to enjoy playing on grass a little bit more.”

She tied Venus Williams’ record of 35 consecutive wins in 2000 as the woman with the longest winning streak in the 21st century.

Swiatek’s triumph also extended her unbeaten streak to 35 matches, surpassing Serena Williams’ record of 34. This, she believes, made her victory all the more joyful.

“I think honestly, it may seem pretty weird, but having that 35th win and kind of doing something more than Serena did, it’s something special,” said the 21-year-old.

“Because I always wanted to… have some kind of a record. In tennis, it’s pretty hard after Serena’s career.

“So that really hit me, you know. Obviously winning a Grand Slam too, but this one was pretty special because I felt like I’ve done something that nobody has ever done, and maybe it’s gonna be even more.”

Swiatek has also won her last nine finals, with her sole WTA final loss occurring in a low-profile tournament in Lugano when she was 17 years old.

“I try to treat it as any other match, which is pretty hard and kind of not possible because there are always going to be like bigger amount of stress,” she added.

“I guess I’m kind of accepting that a little bit more and just, I try to lean on the strengths…

“I’m also aware that my opponents are also going to be stressed. So I try to not panic and just be less stressed than they are.”

Swiatek’s win-loss record at Roland Garros is already an outstanding 21-2, but she has a long way to go to equal her idol Rafael Nadal’s 111-3.

“He had many more chances to lose, so I think his stat is much, much better,” she said of the 13-time champion, who will now face Casper Ruud in Sunday’s men’s final.