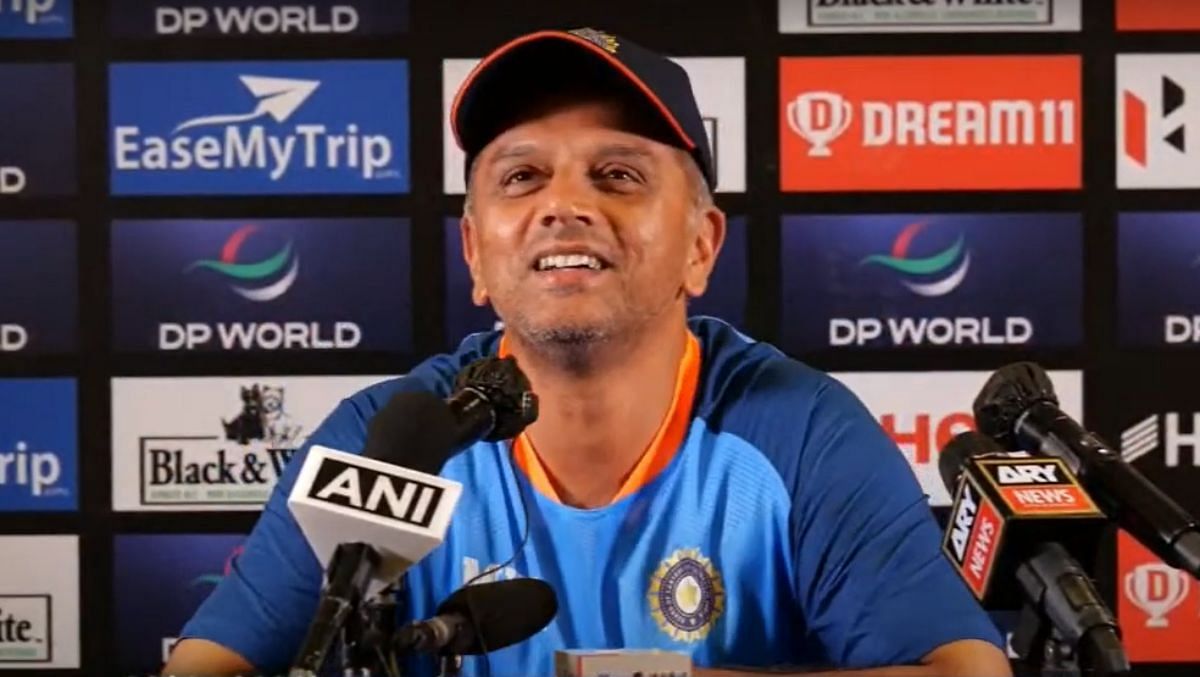 Team India head coach Rahul Dravid had some fun with journalists during a press conference ahead of the India-Pakistan clash in the Asia Cup 2022 on Sunday, September 4.

Responding to a query on Pakistan’s bowling, he stated that India have a very good bowling attack as well. He quipped that he had a “four-letter word” that “starts with S” in mind to describe Indian bowling but can’t use it.

The Men in Blue defeated Pakistan by five wickets when the sides clashed in the group stage of the Asia Cup. Despite the loss, Pakistan’s bowling impressed with debutant Naseem Shah claiming two for 27 and Mohammad Nawaz three for 33.

Asked about the threat Pakistan’s bowlers can pose to India in Sunday’s match, Dravid gave a humorous reply. Speaking at the pre-match press conference, he commented:

“I would respect their (Pakistan’s) bowling, but I am very confident that we have a very good bowling attack as well that produces results. (Our bowling) might not be as…(pauses). I wanted to use a word but can’t use that word (journalists laughing). The word I wanted is coming out of my mind, but I can’t use it here.

Dravid added in a cheeky tone:

“It’s a four-letter word, starts with S, but it’s okay. It might not look very glamorous, but we’ve got some guys who have produced the results.”

The former Indian batter did give credit to Pakistan’s bowlers, but reiterated that his team’s bowling also delivered in the same match. He said:

“Yes, they (Pakistan) did bowl well, but our bowlers also did very well to restrict them to 147. You are judged by your analysis irrespective of whether you are bowling at 145 or 130. Bowling analysis of our fast bowlers was also pretty good.”

Bhuvneshwar Kumar registered figures of four for 26 against Pakistan, while all-rounder Hardik Pandya claimed three for 25.

The Indian coach also responded to reports of young pacer Avesh Khan being unfit. Asked for an update on the same, Dravid replied:

“Avesh has just been feeling a little bit unwell. He’s under the weather with a little bit of fever and stuff. Again, the doctor we have got is managing him. So, he’s not at practice today. Hopefully, he’s not too serious and should be okay for tomorrow or at least the latter part of the tournament.”

Rahul Dravid said “Avesh Khan is little unwell, hoping he recovers in the later matches of the tournament”.

Rahul Dravid said “Avesh Khan is little unwell, hoping he recovers in the later matches of the tournament”.

Avesh proved expensive in the match against Hong Kong. He conceded 53 runs in four overs and picked up one wicket.