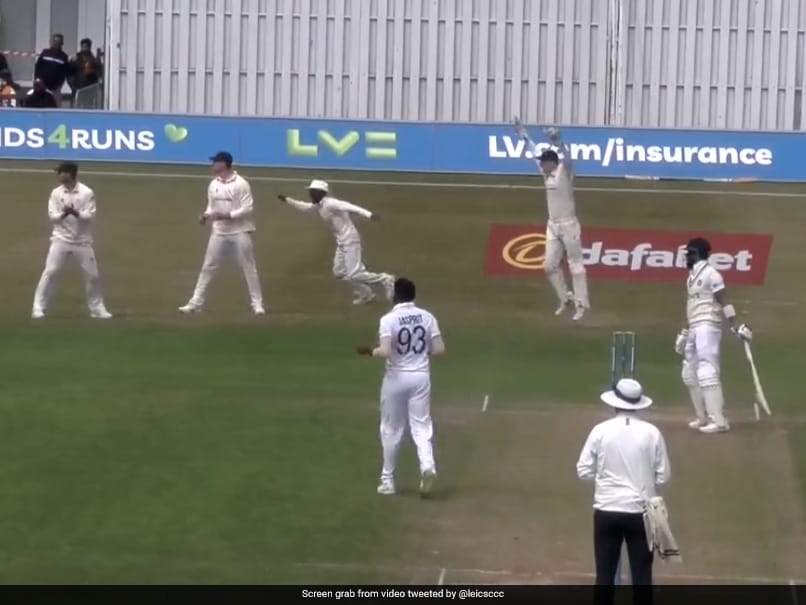 Virat Kohli looked in pristine touch in India’s second innings in their tour game against Leicestershire at the Uptonsteel County Ground on Saturday until Jasprit Bumrah brought an end to his fluent knock. Bumrah bowled for Leicestershire in the practice match and he got rid of the former India captain with a short ball outside off that Kohli could hit to the backward point fielder. “It’s not often you’ll see that. Bumrah dismisses Kohli,” Leicestershire wrote on Twitter, sharing a video of the dismissal.

Kohli looked assured at the crease and scored 67 off 98. He hit five boundaries and two sixes, including a brilliant uppercut off Bumrah.

His batting in the match would be encouraging for India heading into the rescheduled fifth Test against England.

In the first innings too, he looked good for the 33 he scored.

India finished Day 3 of the tour game with a 366-run lead. Ravindra Jadeja, who was out for a duck in India’s second innings, came out to bat for a second time and ended up scoring a half-century of his own as well.

India will take on England in the rescheduled fifth Test from July 1 at Edgbaston in Birmingham.

India led the series 2-1, with wins coming at Lord’s and the Oval, but the final match was postponed due to a COVID-19 outbreak in the visitors’ camp.

India are currently third in the World Test Championships behind Australia and South Africa, and the match against England is a crucial one for the Rohit Sharma-led side in that context.