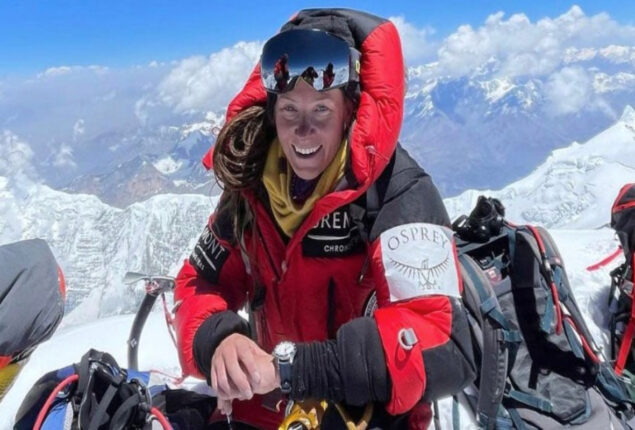 Kristin Harila reached the summit of Mount Manaslu in Nepal, her 12th of 14, she moved closer to her goal of being the fastest person.

The 36-year-old Norwegian has completed 12 peaks in less than five months since she began her record-breaking adventure in April of this year, and she still has two more peaks to climb before November 2.

She achieved a world record in May 2021 when she did Lhotse and Mount Everest in less than 12 hours.

“Kristin summited Manaslu (8163 m) — the eight-highest mountain in the world — today at 2:36pm local time with Pasdawa Sherpa and Dawa Sherpa as the first team this season,” said a statement by her team.

“This was hard, but we wanted to summit Manaslu now to avoid the crowd of climbers waiting at the basecamp. Heavy snowfall and high risk of avalanches made this ascend challenging, so I am glad we made it”, Harila said in a message from the summit of Manaslu, released by her team.

In order for Harila to reach her goal of being the fastest to summit all 14 summits over 8000m, she must now climb two more mountains.

She is still awaiting a Chinese government authorization to climb Shishapangma and Cho Oyu, though.

The last day to submit is November 2.

“I have already proved that women can break barriers. I hope I get a fair chance to set the record, it would mean a lot for women in mountaineering,” she had said earlier.

Cristiano Ronaldo will play for Portugal in Euro cup 2024

Cristiano Ronaldo has announced he will. Continue playing for Portugal until after….