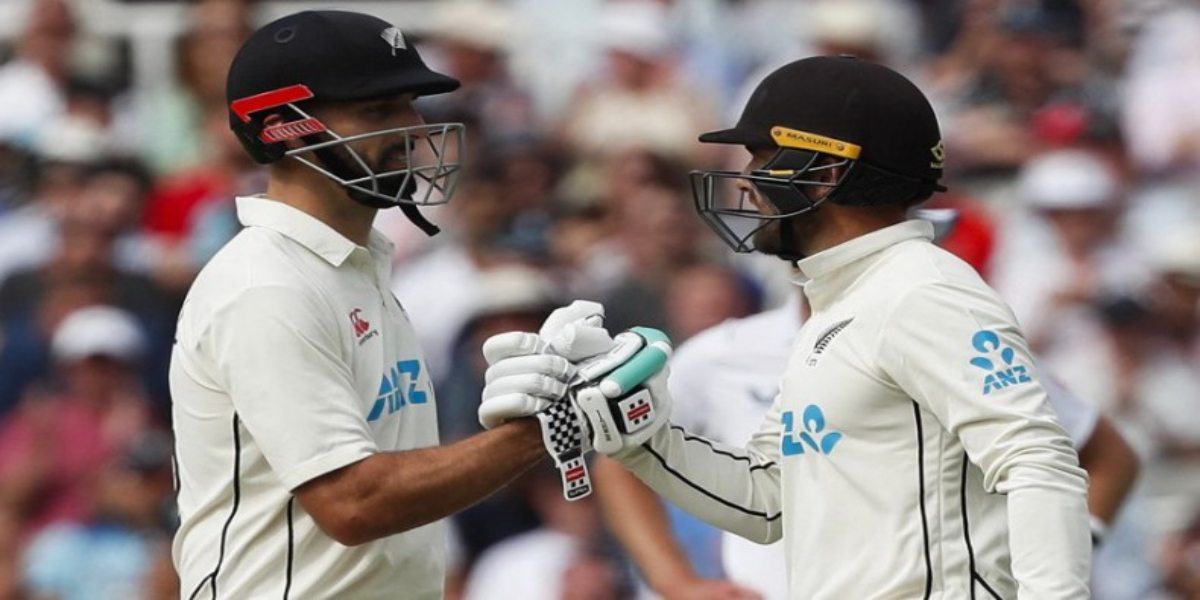 Daryl Mitchell and Tom Blundell were both eyeing coveted hundreds at Lord’s after batting New Zealand into a commanding position on Friday’s second day of the first Test against England.

In a match where bowlers on both sides had previously been on top, the pair’s unbroken partnership of 180 took the  to 236 for four in their second innings at stumps, a lead of 227, after they had come together with New Zealand in trouble at 56 for four.

Mitchell was 97 not out and Blundell 90 not out — the first two fifties of the match.

They compiled the first century partnership of this match in classic Test-match fashion, displaying a sound defence while punishing anything loose or too full.

And at the close they had equalled New Zealand’s record fifth-wicket stand against England, set by Martin Crowe and Shane Thomson at Lord’s in 1994.

Mitchell finished Friday’s play in style, driving the last ball of the day, from England debutant Matthew Potts, for four to move to within three runs of a second Test hundred following his unbeaten 102 against Pakistan at Christchurch last year.

“It was tough toil throughout but to build that partnership with Daz (Mitchell) was very pleasing,” Blundell told Sky Sports.

“I found it quite difficult at first, but it was all about being patient and cashing in on the bad balls.”

As for now just being 10 runs shy of a hundred at Lord’s, wicketkeeper Blundell added: “I’ll sleep well tonight. Those milestones will take care of themselves.”

Mitchell’s alliance with Blundell highlighted how a good pitch was blameless for the fact 17 wickets had fallen on Thursday.

Given England’s struggle to make 141 in reply to New Zealand’s first-innings 132, the visitors may already have enough runs to play with, even though there are still three days left in this opening contest of a three-Test series.

But England assistant coach Paul Collingwood insisted all was far from lost for the hosts in their first Test under the new red-ball leadership duo of captain Ben Stokes and head coach Brendon McCullum, the former New Zealand captain.

“We have a new ball in the morning and some exceptional new-ball bowlers in the dressing room who can do some special stuff,” said Collingwood. “So hopefully we can take some early wickets tomorrow (Saturday) and it is game on.”

The former England all-rounder added: “But credit to New Zealand this (Friday) afternoon because they have played really well.”

Earlier, Potts — who enjoyed a superb first-innings return of four for 13 — struck again with a pre-lunch burst Friday of two for 11 in four overs.

Potts, who had needed just five balls Thursday to claim the scalp of the star batsman as his first Test wicket, produced a fine lifting delivery that Williamson, on 15, edged to third slip Jonny Bairstow.

After lunch, Devon Conway — who last year marked his Test debut with a brilliant double century at Lord’s — fell cheaply for the second time in this match when a mistimed pull off Stuart Broad was caught down the legside by wicketkeeper Ben Foakes.

Blundell square-drove Potts for four, his seventh boundary, after tea to complete a 101-ball fifty and, minutes later, Mitchell followed him to the landmark in 97 balls including five boundaries.

Their efforts ensured the work of new-ball duo Tim Southee (four for 55) and left-armer Trent Boult (three for 21) in getting New Zealand back to almost level terms wasn’t wasted.

Debutant leg-spinner Matt Parkinson, England’s inaugural concussion substitute after replacing the injured Jack Leach, made little impression while England’s attack tiring seamers missed the extra pace that would have been provided by any one of injured express fast bowlers Jofra Archer, Mark Wood and Olly Stone.