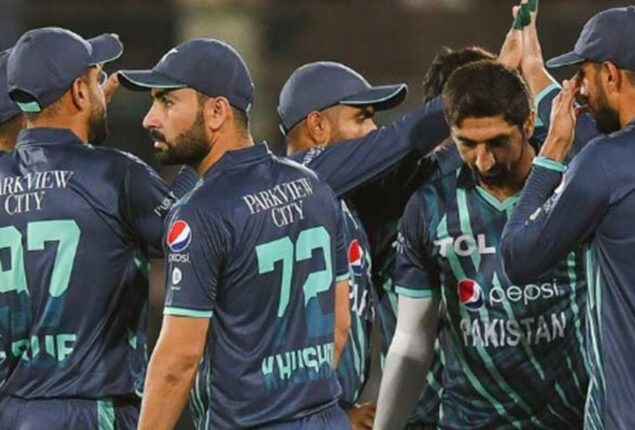 Just hours before Pakistan and England’s second T20I match on Thursday, one of the Pakistani team’s players tested positive for COVID-19.

The report was validated by the Pakistan Cricket Board (PCB). It was stated that the two teams’ intense contest will proceed according to schedule.

Today at the National Stadium in Karachi, Pakistan will play the second of two matches versus England. With an advantage, England is ahead 1-0 in the seven-game series.

Since the England team is visiting Pakistan for the first time in 17 years, the seven-match Twenty20 International series is a historic occasion for the hosts.

In the opening game, the visitors defeated Pakistan by six wickets. Muhammad Rizwan, a wicketkeeper-batsman, pleaded with cricket fans to overlook the errors and the defeat while the team experimented with fresh lineups.

In his post-match interview with the media, he stated that mistakes would undoubtedly be made, but the squad was making improvements to better capitalize on them for the forthcoming T29 World Cup, which will begin in Australia next month.

The 30-year-old batter claimed that these errors shouldn’t be noticed because the team is using these adjustments to find fresh lineups for the World Cup.

“By the grace of God, I and the skipper [Babar Azam] are performing well for quite some time, leaving a little room for our middle order to display their batting acumen,” he said. The power-hitters, across the world, can’t be expected to consistently hit 60 runs in every match, he said.

Usman Qadir, a spin bowler for the Pakistan cricket team, believes that 158 was a score that his team should have defended, but he is optimistic that Pakistan can win the series.

England won the first T20I by 6 wickets and took a 1-0 series lead after successfully chasing down the 159-run goal in 19.2 overs for the cost of only 4 wickets.

However, according to Qadir, 29, the score was respectable enough for the bowlers to defend.

“I think it was a decent total, we should’ve bowled according to plans but unfortunately we bowled away from wicket and also England played very good cricket to chase the score,” he told Geo in an exclusive interview after the first T20I at National Stadium.

As England chased a modest 159-run target in 19.2 overs in the opening of a seven-match T20I series, opener Alex Hales scored a 40-ball 53, his first international score in three years due to a failed recreational drug test.

At a packed National stadium, Pakistan’s opening batsman Mohammad Rizwan helped his team reach 158-7 in 20 overs after England had invited them to bat.

With the victory, England now leads the seven-match series 1-0.