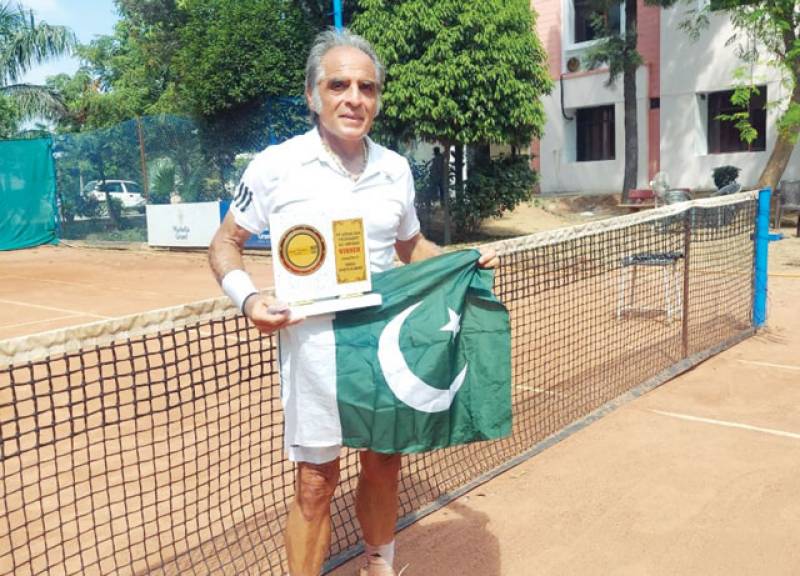 According to information made available here on Thursday, Rashid Malik outpaced India’s Yogesh Kohli by 6-2, 6-2 in the 50plus final. Malik was off to a flying start and conceded just two points to win the first set 6-2. The second set was identical to the first one, where once again, Malik showed his class and didn’t allow his opponent play freely, thus winning the second and decisive set by 6-2 and also succeeded in defending his title.

Rashid Malik, while speaking on the occasion, said that defending the title by defeating an Indian player in India is a big victory and I dedicate this victory to the flood victims of Pakistan. My next target is to win the ITF Senior World Title in Portugal.

“I have been serving Pakistan tennis for a long time and will continue this noble cause. I hope that the government will also recognise my services for Pakistan tennis and honor me so that I may do things with a better way and with more zeal and fervor,” he added.

Rashid Malik doubled his crowns when he, partnering with Tikam Singh, outsmarted the pair of Faiz Ahmad and Syed Babar 6-2, 6-1 in the 5 plus doubles finals. Both Malik and Tikam were in good form and played tremendous tennis to outshone their opponents and claim the doubles title.

Speaking on occasion, Malik said: “I resumed playing ITF Seniors after a gap of four years due to Covid and now I will play a couple of more ITF events to get ready for World Championship next year in Portugal.”

After the doubles final, partner Tikam Singh thanked Malik for partnering him and finishing as title winners. “I thank Mr. Malik for being my partner in doubles and because of him, we could win the 45 plus doubles title. During the match, Mr. Malik guided me well and boosted me and my morale that helped me give my hundred percent and emerge as title winners. He is a very fine sportsperson and we wish him good health and good luck for world championship.”