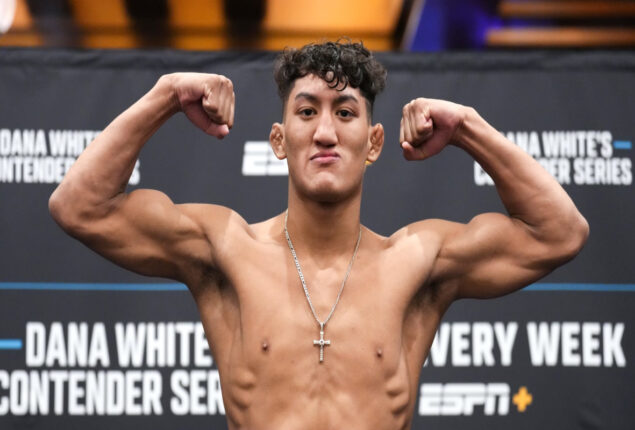 Raul Rosas used his grappling skills to dominate Mando Gutierrez, 25, over course of three rounds, extending his unbeaten run to 6-0.

Rosas had only ever won via submission prior to the match with Gutierrez; the Mexican had made his amateur debut at the age of 15. The previous record was held by Chase Hooper, a former Contender Series contender who signed a contract with the UFC at the age of 18. Rosas has now broken that mark.

Rosas stunned UFC president Dana White by almost finishing Gutierrez in the opening frame with a devastating Suloev stretch submission, but he also consistently showed off exceptional striking prowess throughout the fight.

After winning, he said: “I knew I was gonna get that contract. I’ve been saying it since the beginning. Since I was born, I knew this was gonna happen. “Everybody shouldn’t be surprised. I’m the new king in here, so I’m coming for that belt now. I’m gonna be champion when I’m 20.”

Rosas has five years to break the UFC record for the youngest champion ever when he turns 18 on October 8. Currently, former No. 1 in the pound-for-pound rankings Jon Jones holds the record.

Roger Federer and Rafa Nadal teamed up for doubles match

Federer will play in just one match during the three-day matchup. The…