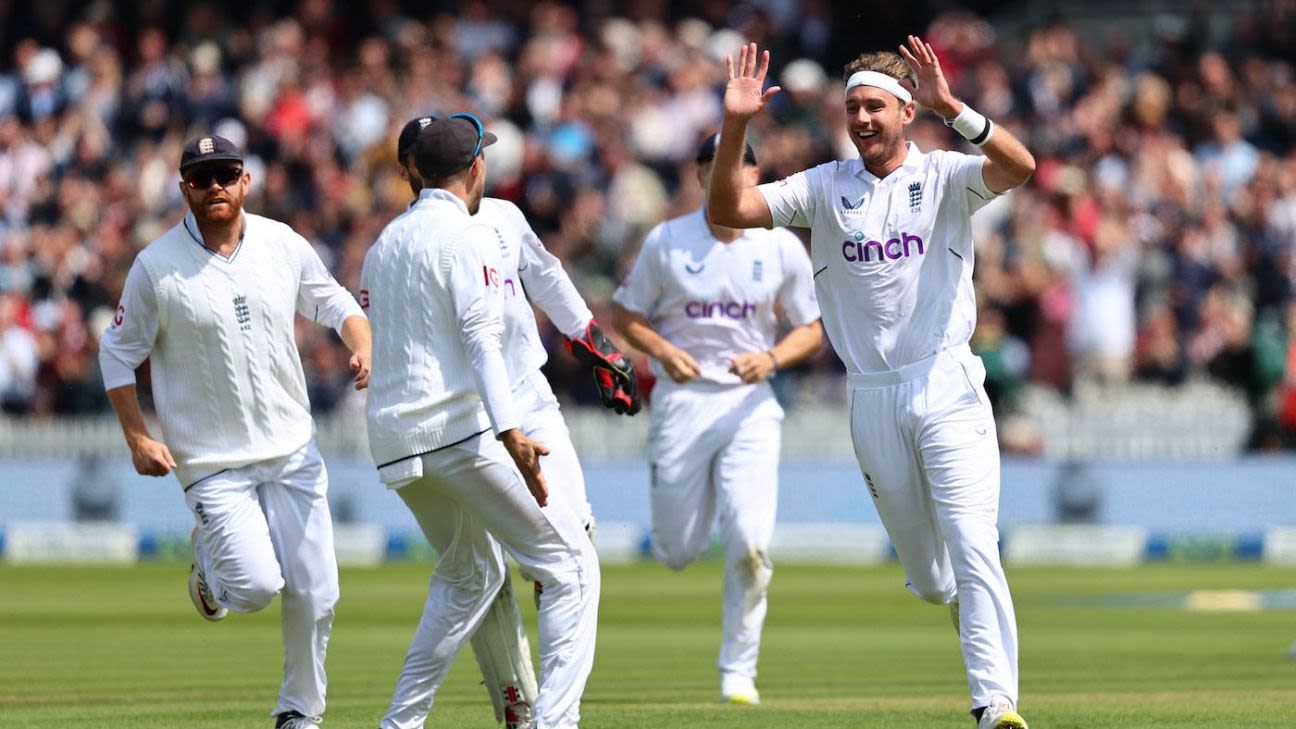 Stuart Broad says that England will carry their new-found positive approach into the clutch moments of their 277-run chase, after Joe Root’s unbeaten 77 and a streaky but vital half-century for Ben Stokes had taken the fight to New Zealand on an absorbing third day of the first LV= Insurance Test at Lord’s.

Broad himself instigated a key momentum shift in the morning session, as New Zealand’s final six wickets fell for 34 runs in 12.3 overs. The first three of those came in a row in his third over of the day, including the run-out of Colin de Grandhomme, as England battled back from a chastening second afternoon to restrict New Zealand to 285.

And as Root and Ben Foakes put together an unbroken sixth-wicket stand of 57 to reduce England’s final-day requirement to a further 61 with five wickets standing, Broad acknowledged that his work in this match could yet be far from done.

“It’s been a really enjoyable Test match, really exciting and hard to know what is going to happen from hour to hour,” he said. “It’s great to be coming [back] knowing either team could win.

“In Test cricket you’re constantly saying ‘it’s a big hour’, and I feel like we’ve said that every single hour here. The hour with Rooty and Foakesy before the new ball is going to be crucial to try and get the runs down as low as we can.

“There’s been times we’ve had to soak up pressure, but we’ve got to have a really positive mindset leading up to the new ball. The way Rooty and Stokesy played after a bit of luck with the no-ball showed the way this team want to go about it.”

After a relatively quiet performance with the ball in the first two days, Broad’s ebullient display was typical of the game-changing displays that he has made his calling card down the years, and after Daryl Mitchell and Tom Blundell had turned the tide of the game with a 195-run fifth-wicket stand, he admitted that it had come at a critical moment for the team.

“It was huge,” he said. “We were a bit disappointed yesterday afternoon…they played really well for their runs. We knew we had to strike with the new ball because the Test match was riding on it. If New Zealand get 340-350 it’s a different game. I really enjoyed the feeling of getting the crowd going, lifting the energy in the stadium. The crowd responded brilliantly and so did the players.”

In his 153rd Test, Broad has seen most situations that the game can serve up, and with Covid restrictions now lifted, he said he was looking forward to taking his mind off the game – and his probable role with the bat – by enjoying a night out for his fiancée’s birthday.

“Gone are the days of 20 beers to relax yourself. That was my dad’s [former England opener, Chris] trick. I think it’s important for all of us to take our mind off the game tonight.

“It’s actually Molly’s birthday today. Happy birthday Molly. So we’re going out for dinner with a couple of her friends which will be great, and I’ll next think about [the match] when I arrive at the ground tomorrow and practice specifics in the nets.

Whatever transpires, however, Broad knows that England have achieved one of their primary aims of this game already, by setting out to entertain.

“A win would be great, it would cap off a fantastic Test match,” he said. “But there’s no-one who’s come to watch this game over the last three days who would leave disappointed, I don’t think.

“It’s had a bit of everything. It’s up to us as a group of players to do everything we can to get over the line, and it would be very special, but if it doesn’t work that way we step up to the plate in Nottingham.

“But I’ve got a really good feeling about tomorrow. Joe Root is one of the calmest, England’s best ever batsmen, and Foakesy I thought settled really nicely, and then it’s going to be up to the lower order to chase these runs, so it’s set up to be a brilliant morning.”