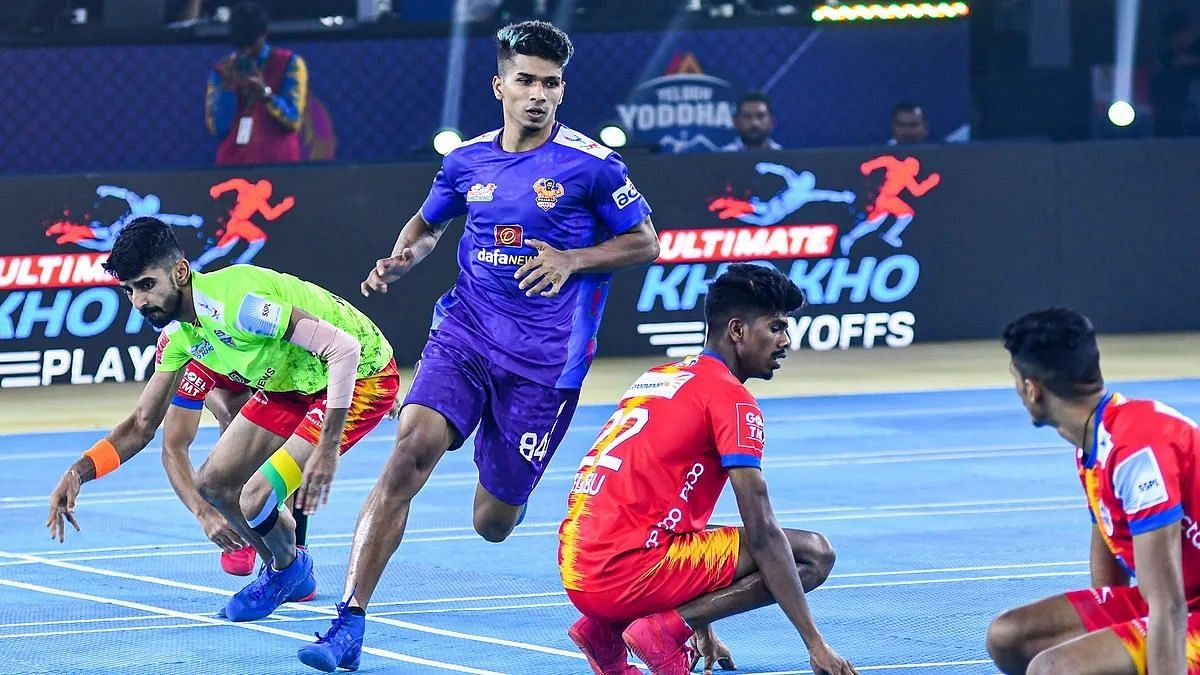 Telugu Yoddhas secured a comprehensive 67-44 win over the Gujarat Giants in Qualifier 2 of the Ultimate Kho Kho (UKK) on Saturday to set up a riveting summit clash against the Odisha Juggernauts.

The Yoddhas came into the game riding high on confidence after thrashing the Chennai Quick Guns in the Eliminator. The Gujarat Giants, meanwhile, received a 43-57 drubbing at the hands of the Odisha Juggernauts on Friday.

It all started with Yoddhas’ skipper, Pratik Waikar, electing to attack first after the coin fell in his favor. Teams winning the toss had been opting to defend first throughout the tournament and the Yoddhas’ decision came as a surprise to many.

The Yoddhas came out all guns blazing and attacked relentlessly right from the get-go. They opted for the Power Play straightaway and sent back a powerful Giants’ Batch 1 within a couple of minutes. The rest of the defenders fell like cards and the Yoddhas completed a Full On Chase, successfully dismissing all four of the Giants’ batches.

The Telugu-based outfit had a massive 37-point lead going into Turn 2 and they built on it with a Dream Run from their first batch itself in the Power Play, with Deepak Madhav doing the bulk of the damage. The Giants garnered some points from thereon but at Half Time, the score read 39-21 in favor of the Telugu Yoddhas.

Coming onto defense once again, the Giants were in heaps of trouble before Abhinandan Patil chipped in with an invaluable eight-point Dream Run. It not only helped the Giants bridge the gap but also took a few minutes off the clock.

However, the Yoddhas had already done the damage by then and the Dream Run just gave the Giants a small glimmer of hope to win the contest. Going into Turn 4, the Giants trailed by 32 points and it was then Telugu’s game to lose.

In the end, the points that the Giants did get were too little, too late. The difference in points proved to be far too much to cover and it was perhaps the Turn 1 onslaught that did the trick for the Telugu Yoddhas.