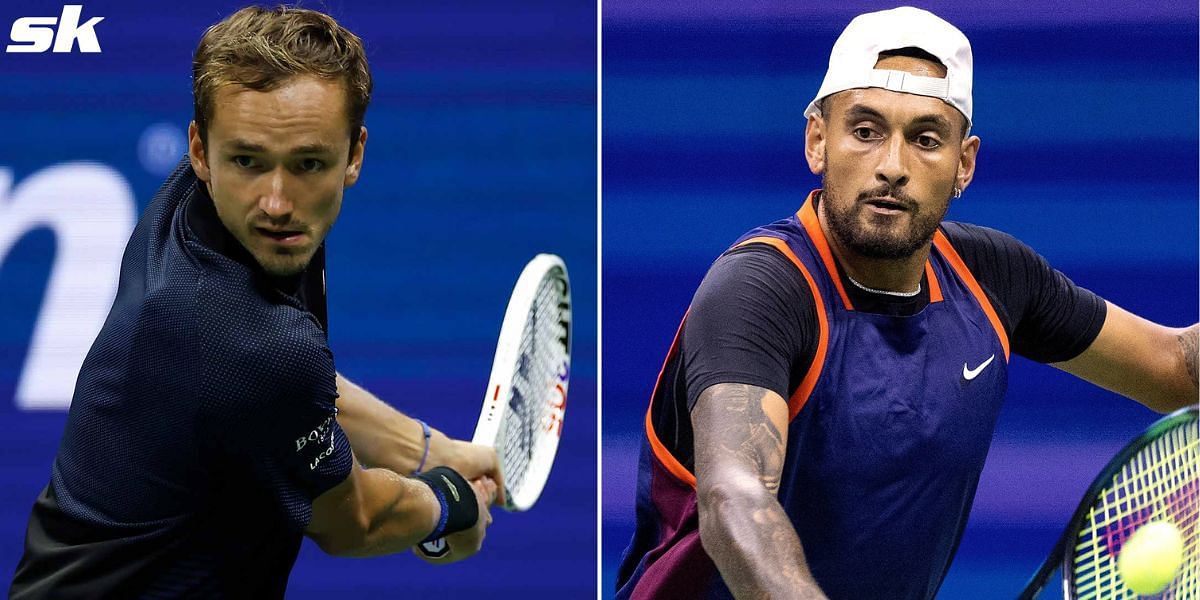 World No. 1 Daniil Medvedev will battle it out against fiery Australian Nick Kyrgios in a thrilling fourth-round clash at the US Open on Sunday.

Medvedev has achieved incredible milestones over the last few months. The then World No. 2 halted Novak Djokovic’s pursuit of the calendar year Grand Slam at the 2021 US Open, beating him in the final to lift his first Major title.

In February this year, he became the World No. 1 for the first time, a position he held for two weeks. He was reinstated as the No. 1 in June and has not moved since. However, this fortnight, he is defending both his US Open title and his top spot in the rankings.

Although the Russian has enjoyed an outstanding 12 months, he hasn’t had comparable success on the courts. Medvedev kickstarted the season by reaching his second consecutive Australian Open final, losing to Rafael Nadal after the Spaniard staged an incredible comeback. He next made it to the semifinals of the Mexican Open and the quarterfinals of the Miami Open.

The 26-year-old was then sidelined by a hernia and wasn’t able to get the best results upon comeback. He reached two consecutive finals at the Libema Open and the Halle Open, but came up short in both. He eventually ended his title drought by winning the Los Cabos Open.

And so the American hard-court summer begins…

His North American hardcourt swing has been otherwise underwhelming. The Russian’s title defense in Canada met an ugly end when he lost to his next opponent Kyrgios in the opening round. He fared better in Cincinnati, reaching the semifinals before being stopped by Stefanos Tsitsipas.

The defending champion’s run at the US Open has been strong thus far, with straight-set wins in the first three rounds, the latest coming against Yibing Wu 6-4, 6-2, 6-2.

Nick Kyrgios, meanwhile, has lost one set so far at Flushing Meadows – in his second-round encounter against Benjamin Bonzi. He has otherwise remained resolute and scored a 6-4, 6-2, 6-3 victory against Jeffrey John Wolf in the third round.

The Australian has maintained good form this year. Although he was crowned the men’s doubles champion at the Australian Open, he lost in the second round of the singles category to his current competitor Daniil Medvedev.

During the North American hardcourt swing, the 27-year-old has found great success. He clinched his first singles title of the season at the Citi Open.

He knocked off defending champion Medvedev in the second round of the Canadian Open and proceeded to make the quarterfinals, where he lost to Hubert Hurkacz. The Australian also reached the quarterfinals of the Indian Wells Masters and the semifinals of ATP Houston, the Stuttgart Open, and the Halle Open.

Kyrgios leads Medvedev 3-1 in their head-to-head. The Aussie has been the winner at the 2019 Rome Masters, the 2019 Citi Open Final, and most recently at the 2022 Canadian Masters. Medvedev, meanwhile, triumphed at the 2022 Australian Open.

This promises to be a high-intensity clash with no clear favorites. In terms of tennis, both have the makings of a champion. Kyrgios will rely mainly on his serve and try to maintain his accuracy while hitting winners. Likewise, Medvedev will hope to score free points on big serves and make smart use of his unorthodox game style.

The contest, however, is most likely to be a mental battle. With a lot to lose, Medvedev will be the more tense player between the two. The Aussie has a positive record against the World No. 1 and came out on top in their most recent encounter last month, which should give him a confidence boost heading into this contest.

However, Medvedev will take the positives from their only best-of-five encounter at this year’s Australian Open where the Russian gained his sole win over Kyrgios in four sets. While the World No. 25 is capable of causing a major upset, Medvedev will likely win the encounter if he stretches the match to five sets.