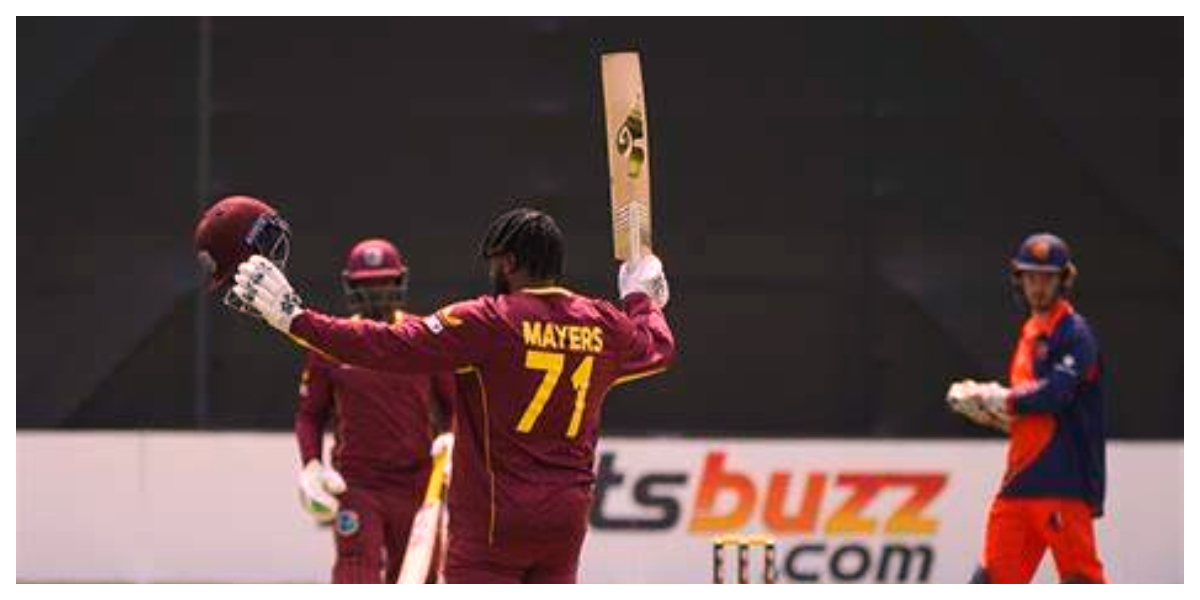 Kyle Mayers and Shamarh Brooks each scored their first ODI hundreds, while key strikes from Hayden Walsh and Akeal Hosein enabled West Indies beat Netherlands 3-0 in the final ODI in Amstelveen. Despite a strong response from the Netherlands, who chased down 309 for around 40 overs due to half-centuries from Vikramjit Singh and Max O’Dowd, they fell short.

Netherlands got off to a poor start, but Vikramjit took on Mayers in the seventh over and began finding boundaries more frequently after that. Brooks dropped him on 33 in the tenth over, and he went on to score three more fours. Mayers, on the other hand, had the last laugh when Vikramjit hit one onto the stumps for 54 straight after the drinks break.

Musa Ahmed took over the scoring after that, allowing O’Dowd, who appeared to be on his way out, to consolidate. Only three fours were bowled in the first ten overs of their partnership, but they rotated the strike well enough to keep the run rate above five.

Despite the fact that O’Dowd was able to play himself in thanks to Bas de Leede’s 24-ball 25, the asking rate for Netherlands had risen to almost six. De Leede and O’Dowd ensured that the hosts kept the asking rate under eight until the 37th over after Walsh defeated Musa in the 30th over. Hosein then dismissed de Leede for a wicket-maiden, raising the necessary rate from 7.92 to 8.58.

Despite the decline on the other end, O’Dowd was able to extend the game. He was undeterred by a few of economical overs, and from the 41st to the 43rd over, when he chopped on Hosein, he got a boundary an over.

After that, the West Indies were able to get three boundary-free overs while also catching Scott Edwards and Teja Nidamanuru. Pieter Seelaar hit back-to-back fours near the end, but the pressure was too much with 60 runs needed off the final five.

After being pricey, Shermon Lewis knocked out Seelaar and the tailenders in his and the game’s final overs to win himself a 3 for 67.

Mayers had set the tone for West Indies with the bat earlier in the day, sharing a 58-run opening stand with Shai Hope, followed by a massive 184-run partnership with Brooks.

Brooks and Mayers combined for 11 sixes. Mayers received 61 percent of his 120 points from boundaries. He was given a reprieve when Vikramjit dropped him before he could get going, and he matched up well against Vivian Kingma, who he got four of his seven sixes against.

Brooks pitched a well-balanced inning, with solid strike rotation and a good command of the strike zone. West Indies, on the other hand, failed to capitalize on their platform, scoring only 67 runs in their final 10 overs.

That was thanks to Ryan Klein, who gave up 19 runs in the three overs he bowled during that time, including Mayers. The tourists, on the other hand, were unaffected by the loss of momentum and went on to win by 20 runs.